The Books And The Crafty Babes. 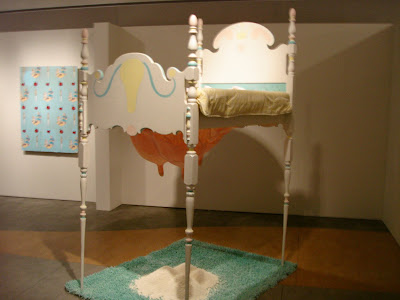 In barely over three months I will be turning 30. I am excited about it and this year I decided that I really want to celebrate (my 16th, 18th and 21st were small immediate family brunches). I thought about having a birthday party (haven't done that since I was very, very young) but all of my friends and family live in another state.

Last year we went to Bumbershoot (choose year 2006) to see the incredible Jose Gonzalez and the Rollerderby championships and oh, oh let us not forget the Indie Market. We planned on going this year (especially now that we are just a minute's drive away) but it wasn't quite as celebration-worthy as I had hoped for this particular birthday.

Then, I saw the line-up. The Shins, Panic! At The Disco and my newest obsession The Avett Brothers are playing. I decided they were both bands that a thirty year old would see and of course a thirty year old would not even consider missing the Indie Market! So we went a little crazy for our birthdays (Simon's is the same week) and bought Platinum Passes for this years event!

A history of indie rock icons: The Books

Since forming in an abandoned laundromat in Seattle, The Books broke into the indie rock scene in 2007 with their debut album, Off The Books. The band's latest album, All Booked Up, merges Simon Le Simon's nonsensical melodies with lo-fi Brit-Pop to somehow pump out some seriously inspired crowd pleasers. With standout tracks like "Adventure," already certified platinum in Europe, The Books can count on loads of future success.

Forged in the back alleys of Hoboken, New Jersey, Crafty Babes exploded onto the techno scene in 1977 with their debut album, Presser Foot. The band's latest album, Serger Blues, blends Vee Vee's ominous growls with jaw-rattling drums to produce a bevy of pulse-pounding scorchers. With standout tracks like "Stitches Too Loose," the music of Crafty Babes appeals to techno fans and non-techno fans alike.

Oh yeah, and we made up these super cool band bio's. I made "The Books" for Si (that is his nickname) and he made the "Crafty Babes" for me (isn't he cute?). You can make your own here (and I would love to read them). Have fun! Hugs. xox=vv.
Posted by christine ann haynes at 2:58 PM 5 comments:

Email ThisBlogThis!Share to TwitterShare to FacebookShare to Pinterest
Labels: abstracts

Now lovelies, I did not mention it but I've been working with approximately 9 minutes of laptop battery life for longer than I can remember. My battery was recalled so I finally got a new one (free of charge. yay!) Working on the computer was a real hassle because the cheap replacement battery charger that I had just would not stay connected. So today with a new battery charger and a new battery I have 3 and a half hours of battery!!! That is 3 hours and 21 minutes more than I have had in at least 6 months!

I have my sewing machine out (we got a little table last week) and I am working on a new project. I switched from the Coats thread to the Mettler thread and now I am having stitch problems. If you have any suggestions, I could really use them.

This Amy Butler Vintage Backpack Tote is for an expectant mother who lives with her husband and adorable one year old in Jerusalem. I figured it would be nice to have a backpack with two little ones in tow. I am also planning to make her a matching head scarf and maybe some toys or blankets for the kids. We will see. The fabrics above are the outer main panels, lining and outer side panels of the bag. Hey Hugs! xox=vv.
Posted by christine ann haynes at 1:48 PM 4 comments: 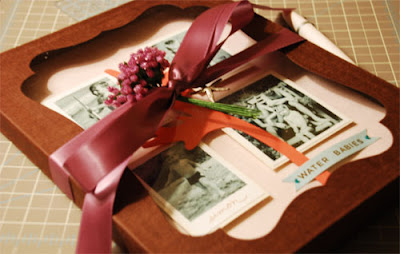 Well, of course, I have jumped on the Martha bandwagon. Wait till you see how crazy I went! We are watching Pan's Labyrinth and I have to hurry back, but I wanted to share this with you.

This is Martha's Photo Family Tree project re-done with a beach theme. I made it for my mother-in-law. It is not completely finished here, but I had to make preperations for wrapping and thought I better take a quick picture of it before I get too far along.

There were pluses and minuses with this project. Let's start with the pluses. It is quick and easy and even if it is not perfect I think it still comes out relatively pretty. The minuses make up a slightly longer list but it is still totally worth it. Here they are though.

1. The Martha label is glued on to the decorative frame so be very careful when removing it. Mine marred the decorative side pulling off some of the finish and I had to sand the whole thing to disguise the marks.

2. Martha tells you to use approximately 26 collectors pins for this project. However, only 6 are provided. They are WAY too long for the box though and if you cut them with wire cutters to a more appropriate length they snag the fabric on their way in.

3. Packaging is lovely but not terribly easy to open and maintain.

4. Martha does not specify which thickness of double sided adhesive foam dots to use.

This project is still an awful lot of fun and certainly worth working around the incredibly minute snafus (hmm have not ever written that word before). If you try this project and have any questions feel free to send me an e-mail.

Tomorrow, we are off for a day trip to B.C. I hope you all have a wonderful weekend. Hugs. xox=vv.
Posted by christine ann haynes at 1:43 AM 3 comments:

None as incredible as these. I am in love.
Posted by christine ann haynes at 12:17 AM 2 comments: 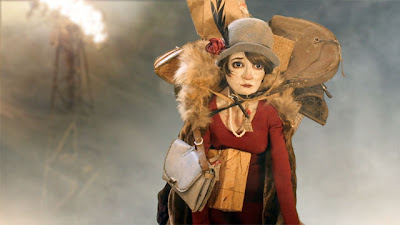 "Madame Tutli-Putli boards the Night Train, weighed down with all her earthly possessions and the ghosts of her past.

She travels alone, facing both the kindness and menace of strangers. As day descends into dark, she finds herself caught up in a desperate metaphysical adventure. Adrift between real and imagined worlds, Madame Tutli-Putli confronts her demons and is drawn into an undertow of mystery and suspense." 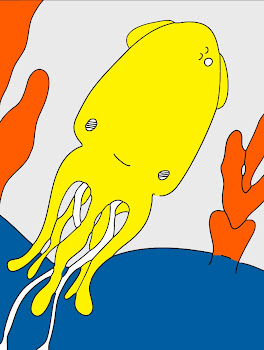 My name is christine ann haynes.
I am a crafter who has had a couple of aliases over the last five years, most recently “vegasandvenice”. I love my last blog, but I allowed it to fall into dis-repair. I am making a fresh start, under my own name. It might be slow going, but I hope you'll stick with me.